The script calls for barbecued ribs for about 1,000 people on a hilltop overlooking the Santa Susana pass.

But the weather’s taken a turn for the worse, production crews are griping about schedules and budgets, and the shoot’s abruptly been moved to a drier locale 26 miles away.

If you’re the catering company hired to feed the workers on this particular scene, you have to roll with the action regardless of the imposition, because you are there to accommodate some of the most finicky eaters on the planet: Hollywood’s elite and their supporting cast and crew.

“This can be a very unforgiving industry,” says Robert Lamkin, owner of Chef Robért Catering, (pronounced Ro-bair) a four-year old catering company serving the TV and film industries, which moved to Sun Valley from West Hollywood in October of 2002. “You have to anticipate many variables. The industry doesn’t care about your personal problems, or how many times you may have been moved in a single morning all before breakfast.”

During the 1980s Lamkin was working as a trained chef in one of San Francisco’s upscale eateries when he was recruited by a large Los Angeles set caterer for a project out of state.

“That turned out to be a five-and-a-half-month film shoot in South Dakota for ‘Dances With Wolves,’” said Lamkin. “We worked 18-hour days for nearly the entire time. I’d say it was probably the best inaugural shoot I could have landed. When we started out, we were working in 100-degree, summertime conditions. By the time we’d finished you could see your breath in the air.”

After nearly 14 years working for other industry caterers, Lamkin decided he’d earned the experience and the reputation needed to run his own show. He maxed out his credit cards and used his stock market earnings to get the $180,000 in start-up costs required for some basic equipment and two catering trucks.

“I was preparing to work on a long-term project in San Francisco and I just kept thinking, I’m going to work very hard and very long on this project and someone else is going to be sitting back earning most of it,” said Lamkin.

“So that was it. I took that job as my first with no business plan in place. We just hit the ground running. Only, this time it was all on my own terms.”

He is also building a $250,000, 26-foot catering truck that will house a 40-quart mixer and four ovens. The company now has four primary catering trucks, which each have four support trailers.

Lamkin is currently searching for a second building in the Valley large enough to accommodate a half-million-dollar stationary kitchen and plans to open up a second satellite location, perhaps as early as 2004.

Lamkin prides himself on being able to accommodate a typical three-month shoot without repeating a single item. And although the Chef Robért menu includes up-scale entrees, such as Carolina pork loin, Maryland blue crab cakes, rack of lamb, or fresh halibut, Lamkin’s customers say the prices rarely upset the bean counters – even those on smaller budgets.

“TV executives are so much more budget-focused than those who are working on feature films,” said Danielle Wienstock, a Los Angeles based freelance TV producer who has worked with Chef Robért for a little more than a year. “So that was a concern of mine before I hired Chef Robért the first time because I didn’t know if they could do the same quality they are known for in film on a lower budget. I have to hit a certain number and they are very creative and can make things work well for me.”

Chef Robért is also making a name for itself within the Valley community. The business has adopted Joaquin Miller High School in Reseda, which offers vocational training and work opportunities to students with disabilities.

Chef Robért, along with the support of Sen. Richard Alarcon, launched the first Class Act Bake-Off Contest earlier this month. Students competed in a cookie-baking contest and, with Lamkin serving as one of the judges, competed for three paid, one-week internships on set with Lamkin or one of his other three chefs.

“We want to be a part of this community and we were looking to attach ourselves to a school, so it was a match made in heaven,” said Lamkin. 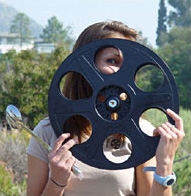 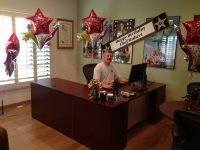 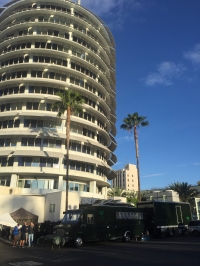